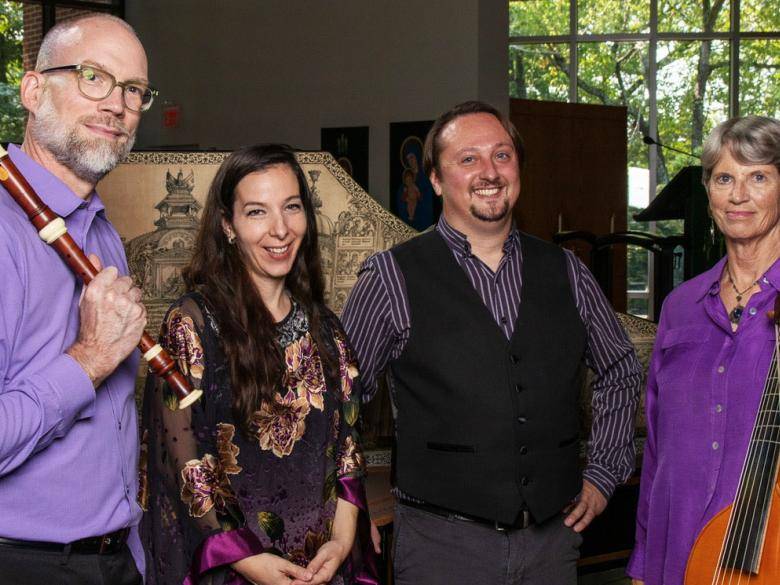 Amethyst Baroque Ensemble presents “Flye Care & Anguish,” a program of music from 17th- and 18th- century England on Saturday, February 29, at 7:30 PM in Gloria Shott Performance Hall at University of North Georgia Dahlonega Campus. This concert is free and open to the public.

Much of the music of the Baroque period was performed with chamber ensembles, especially as England was largely responsible for helping to popularize music through the publication and increased distribution of printed sheet music to a more literate society. A typical performance could have consisted of one or two musicians on a treble part, an instrument performing a bass line, and a keyboard improvising upon the same bass line. Amethyst Baroque recreates this experience with Jody Miller on recorder, a relative of the flute; Marcy Jean Brenner on viola da gamba, a six-string instrument similar to a cello; Adrin Akins singing countertenor, a vocal part for males who sing in the alto and soprano range; and University of North Georgia’s Dr. Alexandra Dunbar on harpsichord and organ.

From the lute songs of Thomas Campion to the recitatives and aria of Johann Pepusch, the repertoire was intended for intimate concert settings, frequently even in one’s home. Amethyst Baroque will perform some common musical forms of the time, such as masque dances, the chaconne, and the secular cantata. The ensemble performs on instruments based on 18th century originals at a=415, about a half step lower than our more common a=440, while the overall tuning system is different from our current equal temperament, which was not standardized until after the end of the Baroque period.

The performers will be available for instrument demonstrations after the concert.