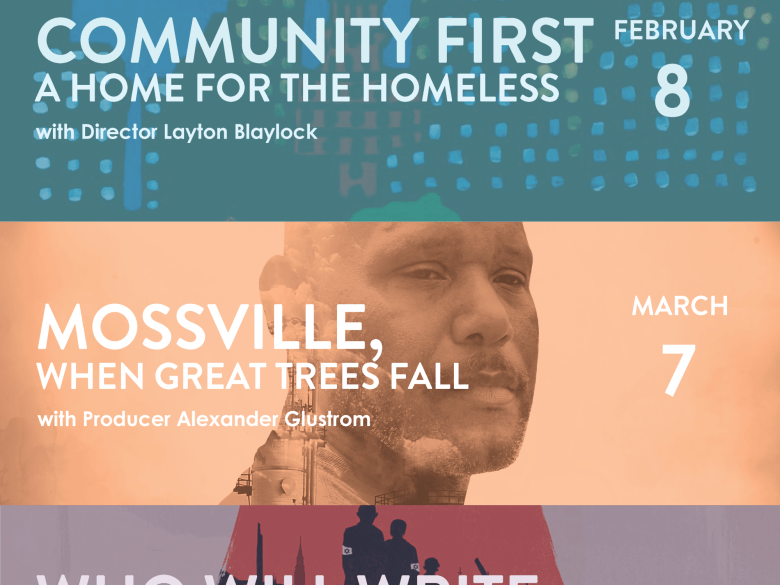 The City of Hapeville proudly presents the Southern Circuit Tour of Independent Filmmakers.

The 2019-2020 Series Screenings will continue on Saturday evenings at the Historic Christ Church & Carriage House starting with a Reception with the Filmmaker at 6 p.m. and the Film Screening at 7 p.m. followed by a Q&A with the filmmaker. Free admission and parking.


February 8: Community First: A Home for the Homeless

Community First is a film by award-winning director, Layton Blaylock. The film captures an extraordinary look at a new movement in Austin, TX that is transforming the lives of homeless people through the power of community. Community First Village is a 27-acre master planned development providing affordable, permanent housing, opportunities for a dignified income, and a supportive community for the chronically homeless.

Visit the Community First: The Movie website for more information or to view the trailer.

Mossville: When Great Trees Fall was edited and directed by award-winning producer Alexander Glustrom. Mossville is an insightful, moving documentary that follows one man’s valiant resistance surrounded by a smoldering, industrial wasteland that has gobbled up Mossville’s once bucolic neighborhood. He is cut off from power, supplies, and community. This film sets to expose the links between race and environmental injustice, not just in the U.S. but across the globe.

Visit the Mossville website for more information or to view the trailer.

April 18: Who Will Write Our History

Who Will Write Our History was produced by Roberta Grossman, based on a book by Samuel Kassow.

Who Will Write Our History is a film about who gets to tell the story. A secret band of journalists, scholars and community leaders decided to fight back. Led by historian Emanuel Ringelblum and known by the code name Oyneg Shabes, this clandestine group vowed to defeat Nazi lies and propaganda not with guns or fists but with pen and paper.

Visit the Who Will Write Our History website for more information or to view the trailer.