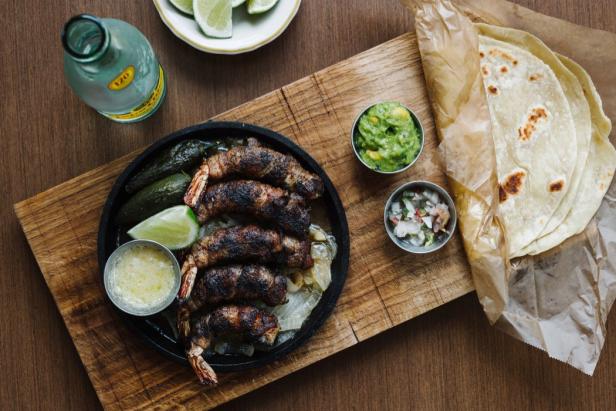 There's no shortage of restaurants on the BeltLine. Most are placed around the Eastside Trail, but more are arriving on the western connections. Krog Street and Ponce City markets alone have countless dining options. We've included a few of our favorite eateries either on or adjacent to the trails, but venture out a bit further and you can find even more.

The former stove factory has become one of the city's top places for dining. In addition to bars like Ticonderoga Club and the beer bar at Hop City, there's a diverse selection of restaurant options at Krog Street Market. Opt for the Mediterranean flavors at Yalla, Tex-Mex at Superica, and pizza at Varuni Napoli.

Kevin Rathbun and his restaurants have been a part of the Inman Park community since before the Eastside Trail's completion. Start at Rathbun's, which has been open since 2004. The fine dining eatery has a menu of dishes like elk chop, mussels, and truffle macaroni and cheese. The restaurant even backs up to the trail.

Play bocce on the patio that overlooks the trail while you wait for your table at this favorite brunch and dinner spot. Two Urban Licks is set in an industrial space brightened up by walls of plants. Share plates with friends over craft cocktails and wine.

Inman Park is full of amazing restaurants, including Bread and Butterfly and Beetlecat. But Parish is located right on the BeltLine and offers a cafe and restaurant setting. Grab a pastry or smoothie bowl for breakfast on the go, or sit down for dinner.

There's nothing quite like a popsicle to cool you off during the balmy Atlanta days. King of Pops has stands all over the city, but Inman Park is the only place you can walk up to their window any day of the week. Here you'll find both traditional and unique flavors.

Locals and visitors alike love the Ponce City Market Central Food Hall for its wealth of choices that can please just about everyone. Chow down on the famous H+F Burger, try Sean Brock’s take on Mexican at Minero, and enjoy wine and Italian fare at Jonathan Waxman's Brezza Cucina.

The BeltLine restaurant scene isn't limited to the Old Fourth Ward. The area around Piedmont Park has plenty of options. The humble Woody’s Cheesesteaks serves up the sandwiches like the ones you'll find in Philly. They've been an Atlanta staple since 1975.

While you're exploring the Westside Trail, stop into Lean Draft House for a pint and a bite to eat. Inspired by European vintage motorcycles and its surroundings, the menu includes 20 craft beers on tap, tacos and other Mexican dishes.

You'll have to cut through Buckhead's residential neighborhoods to get to the closest restaurants, but you’ll be glad you did. Cafe Sunflower has been Atlanta's top vegetarian and vegan restaurant for two decades. You won't miss meat with their Thai green curry bowls and quinoa avocado burritos. 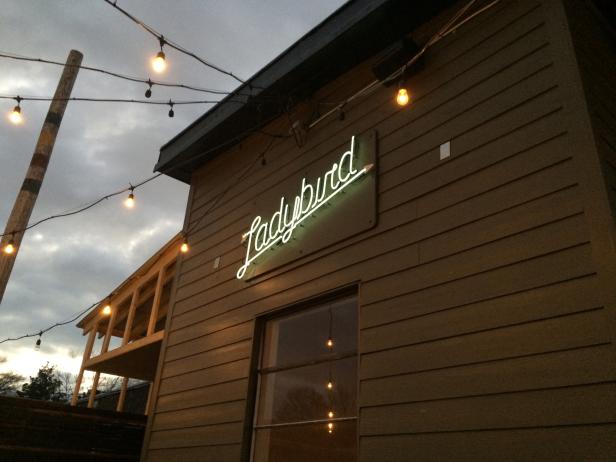 It's no surprise that the BeltLine has become a popular spot for a drink. Pub crawls now take place on the Eastside Trail. The area has an abundance of patios and pet-friendly watering holes. There's something for every style! Here are just three to check out.

Enjoy the camp vibes at Ladybird, a bar and restaurant with a large outdoor area and cozy indoor spaces. Play a round of shuffleboard while noshing on the shared barbecue board, washing it all down with craft cocktails and canned beer.

One of the city's most iconic bars is Park Tavern, which overlooks Atlanta's largest green space, Piedmont Park. They host events like live music and ice skating as well as their epic Peachtree Road Race after-party on July 4.

Monday Night Brewing is just one craft beer operation to set up shop on Atlanta's West End. Located in the Lee + White development, the Monday Night Garage has a barrel aging and souring facility as well as a taproom. Neighbors include outposts of Wild Heaven Craft Beers, ASW Distillery and small batch food companies. 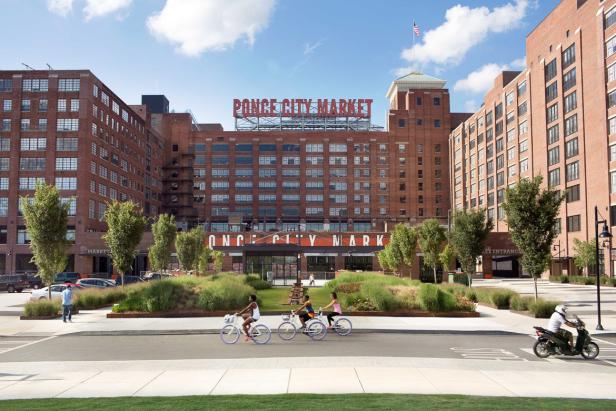 Grab something for yourself at Atlanta's best stores. No longer limited to suburban malls, a number of retail businesses are set up around the BeltLine. Here are three places for great shopping on the BeltLine.

In addition to being home to dozens of restaurants, Ponce City Market is, at its core, a retail heaven. Shop from big-name brands like Anthropologie, J.Crew and West Elm, as well as local shops like Citizen Supply and Savannah Bee Company.

The Krog Street Market food hall also has a retail component. Krog Street Pet Works outfits all of your furry friends’ needs, while The Merchant sells gifts and home decor. Browse the aisles of craft beer and wine at Hop City.

You never know what you might find at Paris on Ponce, a 46,000-square-foot space of eclectic boutiques, including vintage clothing, home furnishings and antiques. There's even a barber shop inside! They have entrances on the Eastside Trail and also from the street level, as well as colorful murals and one of the "Tiny Doors." 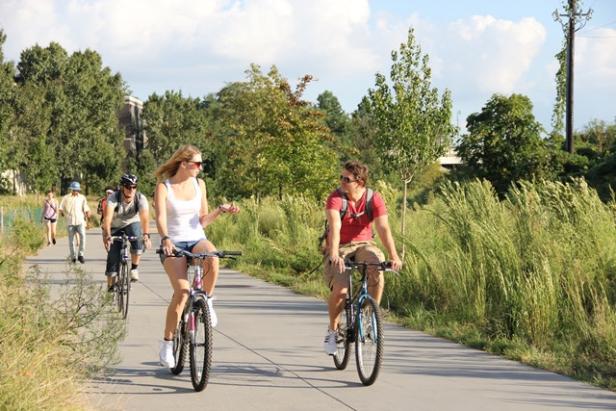 The BeltLine isn’t just for eating, drinking and shopping. There's always something going on, and attractions are within a short walk of the trails.

It’s easy to see the BeltLine by foot, but you can also rent a bike to see it by two wheels. On the Eastside Trail, you can rent from Atlanta Bicycle Barn (near the John Wesley Dobbs entrance) and at Skate Escape (on the other side of Piedmont Park). Relay Bike Share also has stations at Irwin Street, Historic Fourth Ward Park, Piedmont Park, and at the West End MARTA Station.

In addition to the miles of trails, there are dozens of connected public parks. Piedmont Park is the largest, designed in part by the Olmsted Brothers, and connects to the Eastside Trail. It features a public pool, sports fields and events like the annual Peachtree Road Race. Historic Fourth Ward Park is also connected to the trail, home to a skate park, free yoga classes and frequent festivals.

Gordon White Park on the West End Trail opened in 2008 on a formerly abandoned lot, making it the Atlanta BeltLine's first park. Much of the Northside Trail cuts through Buckhead's Tanyard Creek Urban Forest. Arthur Langford Jr. Skate Park is the BeltLine's second skate park and will eventually connect to the Southside Trail.

Oakland Cemetery may be better known, but Westview Cemetery is the final resting place of notable Atlantans like Joel Chandler Harris, Asa Candler and Henry Grady. It's the largest civilian cemetery in the region, stretching over 500 acres. Westview Cemetery Abbey is a must-see landmark within the cemetery.

The stunning Victorian mansion in the historic West End was the home of writer Joel Chandler Harris, author of the Uncle Remus stories. Now operated as a museum, The Wren's Nest retains much of the decor that existed while Harris and his family lived there.

The Museum of Contemporary Art of Georgia

Get your dose of culture at the Buckhead-based The Museum of Contemporary Art of Georgia. Accessible from a road that connects to the Northside Trail, it has a permanent collection of contemporary works as well as changing exhibits.

The rooftop theme park at Ponce City Market is a year-round favorite, featuring old-school carnival games during the summer and ice skating during the winter. Skyline Park honors a park that was once located nearby. 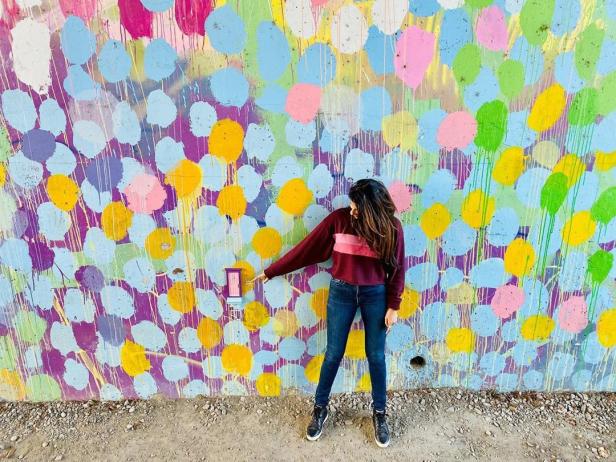 Mural and a Tiny Door on the Atlanta BeltLine. Photo by Nomita M., @nomasaurus21

There's no shortage of places to photograph along each of the BeltLine trails. Public art work is found throughout, including murals and sculptures. Don't miss the Tiny Doors that line the trails as well as photogenic viewpoints. The bridge overlooking Ponce de Leon Avenue on the Eastside Trail and the railroad trestle on the Northside Trail are favorites. 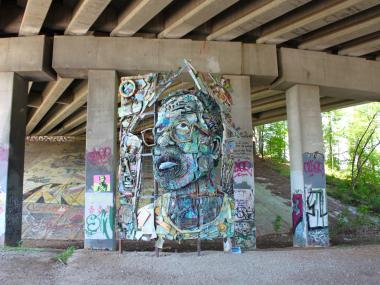