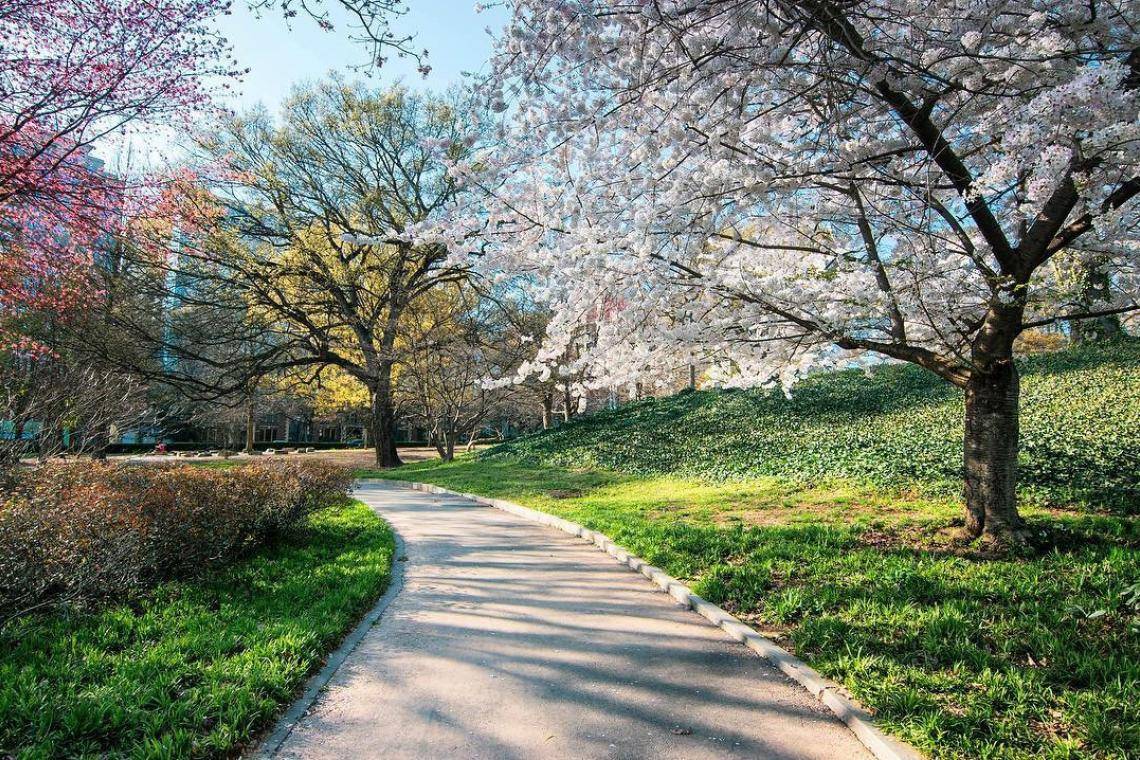 Spring has sprung in Georgia, bringing blooming flowers, warmer days and festivals of all kinds. It’s time to start planning spring break and other weekend getaways around the Peach State. There's something to offer every interest!

IMPORTANT UPDATE: Due to COVID-19, some events have been canceled or postponed. This list may not reflect the most recent updates. Before you go, check social media, the venue's website or call to confirm event plans. 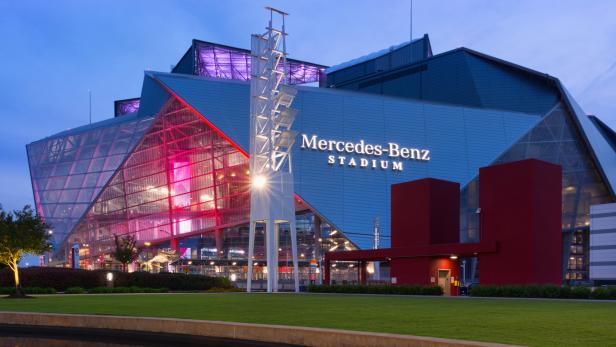 Catch all the sports action in Atlanta & Augusta

The first weekend in April, Atlanta will be filled with exciting events for the 2020 NCAA Men's Final Four, held at Mercedes-Benz Stadium. Basketball fans won't want to miss a minute! Not only will the Division I teams play the semifinal games on Saturday, April 4 for the chance to compete in the National Championship Game on April 6, but the Division II and III National Championship Games will be held Sunday, April 5 in State Farm Arena.

From the Final Four Fan Fest presented by Capital One at the Georgia World Congress Center to the free NCAA March Madness Music Festival in Centennial Olympic Park featuring Taylor Swift on April 5, and much more, the weekend promises to be one of the most exciting events of the spring.

See what's in store for the Final Four.

While you're in town for the Final Four, you can also take in an Atlanta Braves game at Truist Park. The Braves open at home April 3 against the Miami Marlins. The Braves' first homestand of the season will continue with two more games against the Marlins and a three-game set against San Diego.

Plan your trip with this Insider's Guide to Atlanta Braves Games.

Tickets to the legendary golf tournament in Augusta are hard to come by, but even if you don't have tickets, there is plenty to do off-course during Masters Week April 9-12, 2020. Follow these tips for how to make the most of your trip, concerts and other events you'll want to check out, and great places to watch the championship without going to Augusta National.

Plan your trip with this Guide to Augusta. 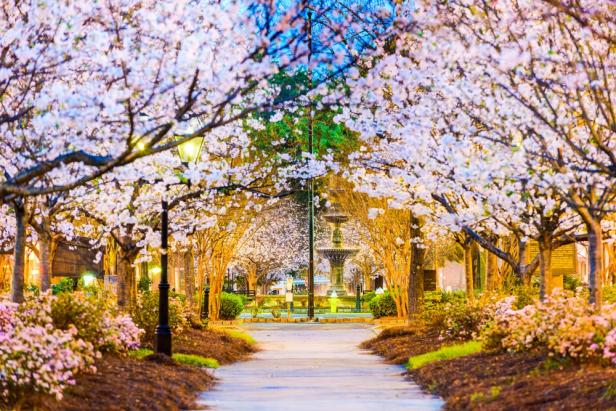 Just as daffodils, dogwoods and azaleas flourish in the spring in Georgia, so do outdoor arts festivals and music festivals. Pick any city, and you'll likely find a spring festival to enjoy!

The International Cherry Blossom Festival in Macon is a perennial favorite, held in March, that features art exhibitions, rides and performances.

Savannah Music Festival in March and April is the state's largest, featuring artists from all genres, including classical, jazz, folk, country, and rock.

The Atlanta Dogwood Festival is held every April in Piedmont Park and features a juried art competition, arts and craft vendors, performances, and food and drink. It's Atlanta's oldest outdoor event and features views of the skyline framed by blooming trees and flowers.

Shaky Knees music festival in May brings in rock, R&B and electronic acts to Atlanta.

The Blind Willie McTell Blues Festival in Thomson brings in big-name acts every May. 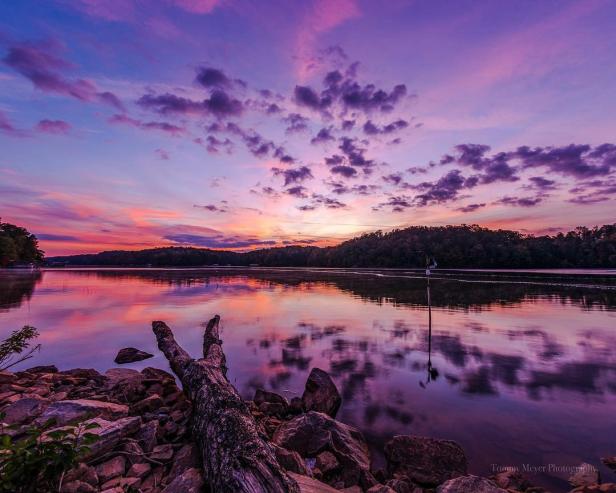 Get out on the water

Enjoy the great outdoors around Georgia, especially the lakes, rivers and ocean.

Georgia's Lake Country boasts a number of lakes, including Oconee and Sinclair. Closer to Atlanta, Allatoona and Lanier welcome boaters and fishermen. Lakes Burton, Rabun, Hartwell and Blackshear are also worth exploring.

For high-octane whitewater rafting, visit the artificial rapids in Columbus. Clayton has some beginner-friendly rafting, as well.

The Chattahoochee River runs from the top of the state to the bottom with opportunities for recreation along the way, including tubing near Helen and Atlanta, as well as kayaking and paddleboarding. Albany’s Flint River runs through town, allowing visitors to put in their boats easily. 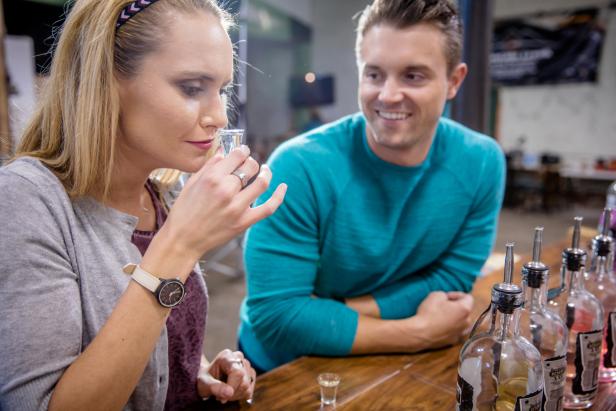 Tour a brewery, cidery or distillery

The Peach State has a thriving scene for craft beverages as new breweries and distilleries are opening every year in every corner of the state. No matter where you go, plan on having a designated driver.

Atlanta has the most craft breweries, including big-name ones like Sweetwater and those with multiple locations like Monday Night. But there are many breweries in other cities and towns, like Macon Beer Company, Creature Comforts in Athens, and Eagle Creek Brewing in Statesboro. Grab a bite with your pint at a brew pub, like Rome City Brewing Co. and Good Word Brewing and Public House in Duluth.

For more great breweries, check out this list of The 21 Essential Breweries in Georgia.

The gluten-intolerant can rejoice, as there are also cideries around the state. Urban Tree Cidery is located on Atlanta's Westside with a taproom to sample their varieties. Treehorn in Marietta is another favorite, as is Mercier Orchards in Blue Ridge. If you're looking for a low-alcohol option, Cultured South on Atlanta's West End brews the popular Golda Kombucha.

Distilleries also are open to visitors to offer a glimpse into how your favorite spirits are made. Atlanta has the ASW Distillery, Old Fourth Distillery and Independent Distilling distilleries. Dalton Distillery and Dawsonville Distillery both specialize in legal "white lightning." Richland Rum in Richland and Brunswick crafts the only single-estate rum in the United States, made from Georgia-grown sugar cane. 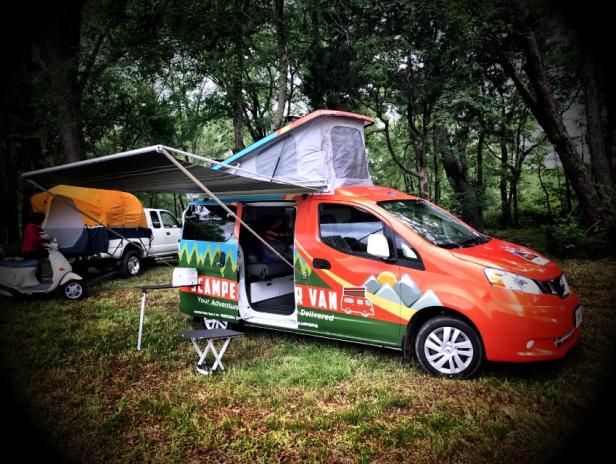 What’s a better time to start planning a getaway by car? Decide what you want to see, whether it be coast or mountains, cities or small towns. Follow the charming historic towns of the Antebellum Trail or the coastal communities from Richmond Hill to Darien along US-17. Bring your own car, or hire a campervan from Scamper Van or Escape Campervans, which allows you to sleep in your wheels at one of the state's many campgrounds. 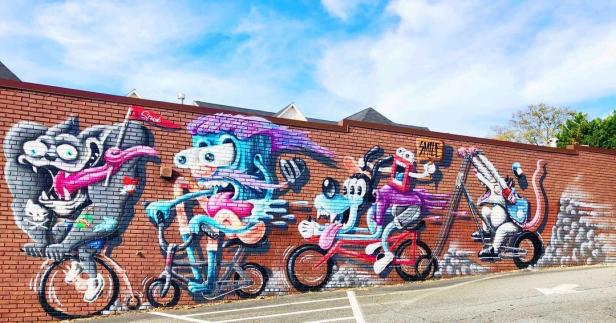 Looking for colorful walls to photograph? You're in luck. Atlanta has hundreds of murals in every corner of the city, especially around Cabbagetown and Old Fourth Ward. Savannah also has its own, usually commissioned by art galleries and non-profits to beautify their buildings. Macon also has upped its game in terms of public art, with murals, sculptures and Little Free Libraries around town. Don’t miss the mural in Dublin, which honors the civil rights movement and Dr. Martin Luther King, Jr. 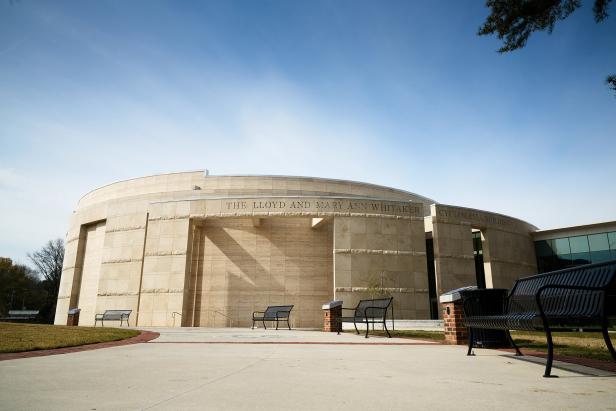 Even if you're out of school, you're never done learning. Use this spring as an opportunity to visit some of the state's history museums.

View the fully restored cyclorama painting, "The Battle of Atlanta," in its new home at the Atlanta History Center. The painting is one of only two cycloramas in the United States — the other being the Battle of Gettysburg cyclorama — making Atlanta home to one of America's largest historic treasures. Cyclorama: The Big Picture is included in Atlanta History Center's all-inclusive general admission ticket, which includes full access to all exhibitions, four historic houses and 33 acres of Goizueta Gardens.

The Albany Civil Rights Institute focuses on an often-overlooked part of the civil rights movement, which includes Dr. Martin Luther King, Jr.'s visit to Albany and the nearby Leesburg Stockade. If you can visit on the second Saturday of the month, you'll get to experience live performances by the Freedom Singers, who used their voices to draw aid and support for the movement in the 1960s.

The American Prohibition Museum in Savannah reminds visitors of the "Great Experiment" with interactive exhibits and even an authentic speakeasy.

The Augusta Museum of History is the only place beyond Augusta National where you can see the famous green jacket from the Masters golf tournament. It also has an exhibition on The Godfather of Soul, James Brown, who grew up in Augusta.

And the National Civil War Naval Museum at Port Columbus has an ironside ship pulled from the depths of the ocean. 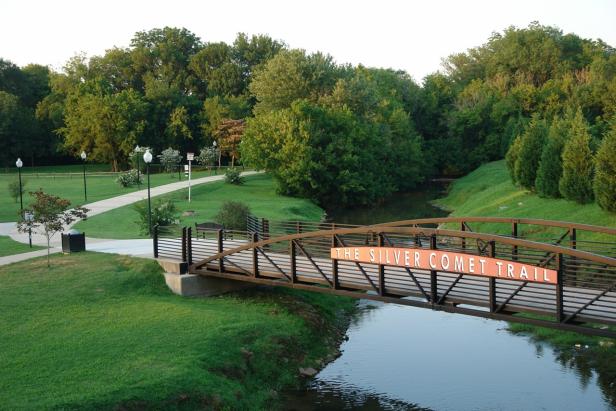 Gear up with your helmet and two wheels to explore the state. There are plenty of paved bike paths for beginner or expert riders.

The Silver Comet Trail is a national treasure, running from Smyrna to Cedartown before crossing into Alabama.

The Atlanta BeltLine is a popular path, looping around the city, but can be crowded on weekends. Also check out the lesser-visited sections of the trail like the Westside and Northside.

The 18-mile long linear Carrollton GreenBelt is the largest paved loop trail system in Georgia. Explore Carrollton by pedaling to the University of West Georgia, numerous shopping centers and a number of city parks along the way.

The Arabia Mountain PATH runs 30 miles, linking cultural, scenic, natural and historic sites, including the Monastery of the Holy Spirit in Conyers.

The Chattahoochee Riverwalk in Columbus runs 15 miles alongside the water, offering views of the whitewater rapids and a connection to the National Infantry Museum. 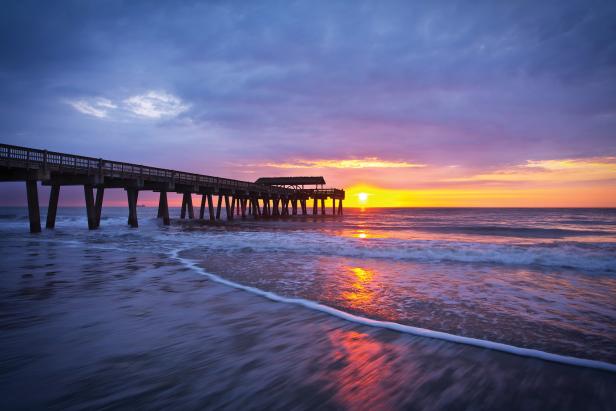 Go to the beach

Georgia's beaches are among its best resources. Explore some of Georgia's 15 barrier islands, including:

Tybee Island is a family-friendly beach town that is a short drive from downtown Savannah.

If you're looking for a luxurious getaway, Sea Island is an award-winning resort with beach access.

Adventurous types can camp at the beach at Cumberland Island, a National Seashore known for its wild horse and ruins of the Dungeness mansion.

Find more to explore on the Georgia coast. 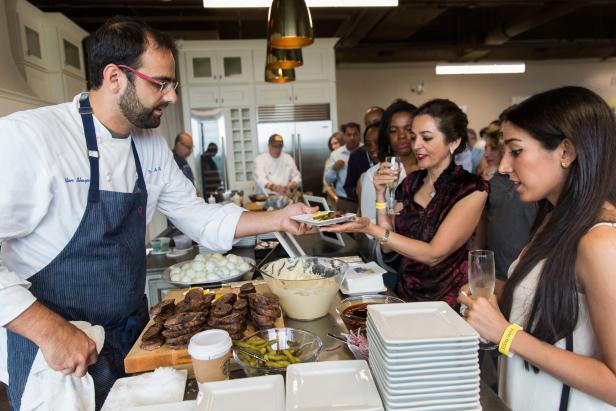 Take a culinary tour of the state

You can't say we don't eat well in Georgia! Go in search of fresh flavors this spring on a culinary trip across the state.

Attend Georgia's spring food festivals to sample a huge menu of options. A few choices include:

Check out one of the many food tours like Atlanta Food Walks, Taste of Thomasville Food Tours or Savannah Taste Experience.

You don’t have to go on an organized tour and can instead plan your own. Choose some new dishes to try from Explore Georgia's list of 100 Plates Locals Love, or visit 10 of the locations on the Brews & Q's Trail and earn a free t-shirt.

Let Good Taste Be Your Guide

Search for your destination on OpenTable, where you might be able to grab a last-minute spot at one of the James Beard Award-winners. Alternatively, pick out a few places on your own and order small bites along the way.

Use the Explore Georgia Culinary Guide to plan your trip. 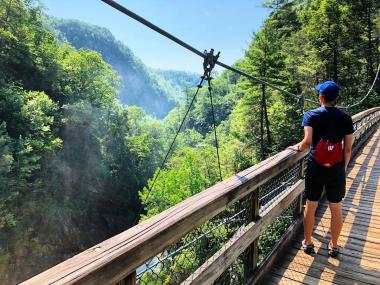 Whether you are traveling far or near, saving or splurging, excitement awaits you in every... 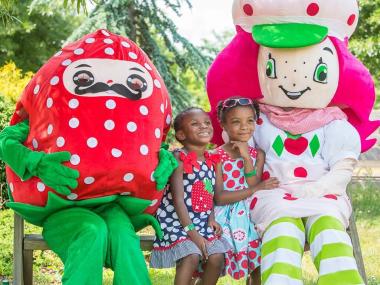 You already know the best places to pick strawberries in Georgia, but do you know... 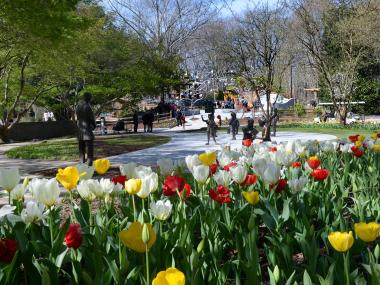 Springtime warms up nicely at botanical gardens all over Georgia. Enjoy that special sweetness in...